So where were we?

It has been quite a while since the last update, but that’s mostly due to the ongoing development taking up the limited spare time I have.

Progress was definitely being made on the Impulse portal. Last update I wrote about the beginnings of the linear actuator design. It has since been fully developed and tested. I made a closed loop PID controller that turned into a fairly powerful linear actuator. It could move rapidly under load and provide data feedback about variables like velocity, acceleration, jerk, etc. I used this bench test to see how far I could push the selected 600W motor, but in the end it could only reliably lift 26kgs, no more. Unfortunately this wasn’t enough grunt overall, but at least it gave me the data needed to spec a bigger better motor. In my haste to build, code and test this rig, I didn’t take a lot of photos. Here is what I do have: My hacked together 24V power supply (40 Amps) made from three 7.5V PSUs in series (and dialled up a little); The final form of the linear actuator with it’s weight lifter attached by strap (with bonus messy benchtop); A video of the actuator lifting 15kgs of lead. 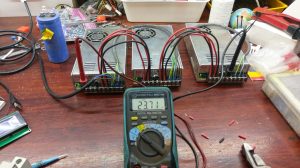 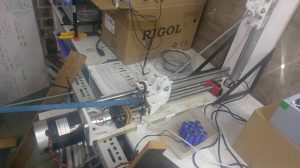 I’m pretty proud of the code that I put together to make this work and to measure all of the variables in place. It looks like I’ve hit the limit of what can be achieved by low voltage motors though. Going forward means upgrading to mains voltage servo drives, which of course come their own (arguably better) positional drivers. That means the code I made is pretty much redundant, but at least I learned a lot in the process.