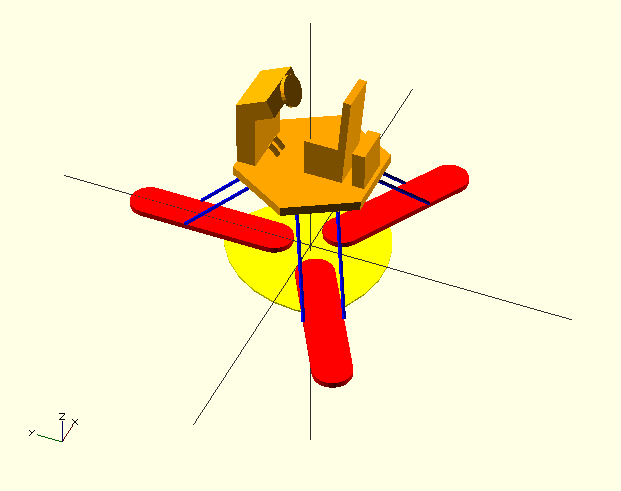 Ok, I think I have phase 1 completed. The software that drives my rotational motion sim has since been modified to include acceleration and deceleration profiles. At the moment I have only done it with linear acceleration, but they were written with the ability to change later, if logarithmic or exponential profiles fit better. It seems to function pretty well, and I am happy with it.

I have also modified the communications side of things, so that a string of data can be sent via an application instead of punching in numbers on a keyboard. Now all I need is an application. This is where phase 2 comes in. Or maybe phase 3, not sure yet.

The last few weeks I have been working on the other half of the build design. Now that the rotational component is done, I am designing the chair moving mechanism. I have taken inspiration from the various designs of delta robots out there, and am fiddling with variations on these to move a chair assembly. So far I have come up with 3 different designs, 2 of which I have chosen to flesh out.

Doing the inverse kinematics calculations from the ground up has been interesting. I have been using the open source program “OpenSCAD” to model the 2 ideas. They give me the ability to see the objects I am trying to describe, which is really helpful to me as a hands on learner. It allows me to see where the mathematical model works, and the conditions under which it doesn’t work. I tried looking into other peoples’ calculations and programs, but it was difficult for me to follow without the knowing the groundwork. This way has been a good experience for me. 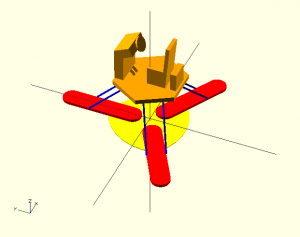 My first idea designed in OpenSCAD 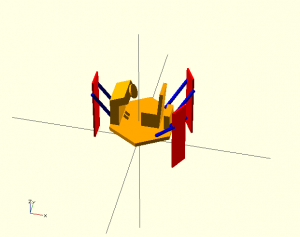 My second idea, designed in OpenSCAD

The red objects in the images are the rails on which the blue rods will slide. The rods will always be in parallel, and as such will keep the chair mechanism level. As the 3 different slides change the position of the attached blue rods, the coordinates of the chair will change. The maths to describe the movement of the 3 slides (A B and C) as a function of the chairs desired coordinates (X, Y and Z) has been the focus of many late nights.

I now need to fine tune some of the other variables, so that I can get the most movement out of the smallest amount of space. After all, this needs to fit inside the rotating mechanism seen in the last videos. The plan is to build these outside the rotating machine so as to see it’s movement in real time as a demonstration, but the full size machine will have all the parts inside. And it will awesome!!

And it still needs a name… any ideas?