We have had a bit more time to spend in the workshop lately, which is great. Here are some updates to the previous 3 projects: 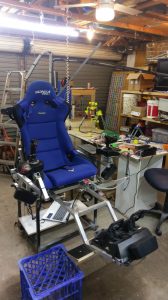 Yet another design change, better now than later. It’s not a major change, but we thought the roller / truck assembly was a bit over engineered and as a result would be very time consuming to build and maintain. The roller coaster analogy has been dropped in favour of a simple roller bearing / linear slide translation method. A quick and dirty test build worked much better than anticipated. 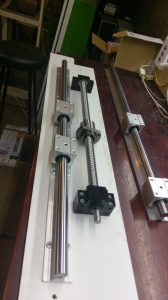 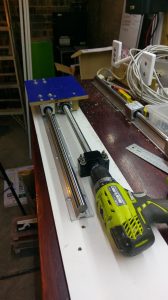 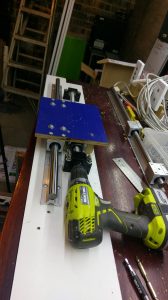 The ball nut was able to move rather quickly off an old battery drill, no special mechanisms or gearboxes attached. The drill maxes out at 1600 rpm with no load, and the whole rig was rather smooth to run. We held it on it’s side and the ball nut just started spinning down under it’s own weight! This design is by far simpler than earlier, and we can purchase most parts off the shelf. Our next test model will incorporate a new motor, custom driver and monitoring software to see what it can handle. The driver will be build from the ground up, the parts have just started arriving. I anticipate a 1600 RPM 24V DC brushed motor will be enough, I just need to calculate the expected torque. Our new test rig will have provisions for adding weights to see how it fairs as we get more and more loaded. I’m hoping to generate a graph from the data and use that to improve the code.

Lessons have been learned the hard way though, don’t take a ball nut off the end of it’s screw shaft! 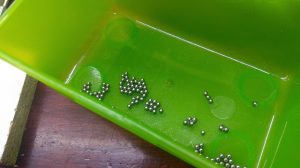 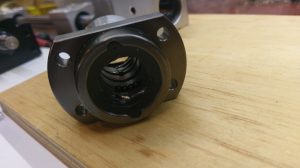 I was able to return all the balls back to their places in an hour and a half or so, and luckily it still spins smoothly. Don’t make that mistake if you can help it.

Not much to say here. Some more parts have arrived, but I haven’t put any special attention into getting them integrated. I have learned some more about transistor and mosfet based circuits however, and I think I need to slightly modify my design to protect it for the long term. Besides, most of the time that would be dedicated to this has been in used to expand the workshop, so all is not lost.

This has been the biggest time sink, mostly because it has the closest goal posts. The UPS Hat from Geekworm has been a disappointment. The unit just can’t supply a Pi with enough power reliably. The Lightning bolt icon (on screen, and indicates poor power supply) is ever present on battery, and intermittent when charging. But the battery itself seems fine, and we have moved onto an Adafruit Powerboost 1000c to provide the same function, and it has a few more features like low battery and enable signaling.

The new screen has arrived, and we got to working on the case straight away. Our first attempt at replicating the innards of the Wii Classic controller were pretty close, and I’m sure the second try will be more fruitful. It is pretty complex with the way the buttons stay in their spot, but so far so good. 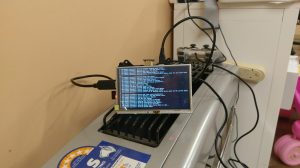 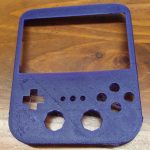 As for the driver, it seems like it would be better time spend integrating the Wii Classic onto a microcontroller (such as the Arduino micro pro), which can also manage the power, button states and shutdown sequencing. This can open a whole range of other options, like disabling the USB Wifi without interfering with the Pi at all. I am much more comfortable with this control avenue after all.